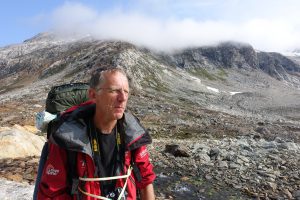 Rolf Smeets takes care of this site. He has been working several years as a biology and physics teacher in special education at a school in Nijmegen (the Netherlands).
He studied ecology of the tropical high mountains – in Utrecht and Amsterdam, and worked on ecological research in the Colombian Andes. After graduating, he and some friends founded an ecological travel agency: Ecotravel Nature tours. This was the first ecotourism agency in the Netherlands.
Rolf worked about 6 years in this agency. He organized and supervised many tours. He also wrote documentation for his clients. Thus he gained much knowledge of flora, fauna and geography of many Latin-American countries.

In 1994, Rolf moved to Brazil where again he worked in tourism. He founded and managed a small hotel on Ilha Grande, an island in the neighbourhood of Rio de Janeiro. This was a fantastic full time job. He was responsible for all tasks, from choosing the menus to advertising the hotel clients and making excursions in the area. The hotel won a prize: it was one of the top five ecological hotels in Brazil.

With the travel jitters in the legs, Rolf moved in 1997 to Bolivia, where he worked one year as co-manager of a travel agency for nature and adventure travel. Of course, he supervised a lot of travelling, worked on web design, promotion and other commercial issues for this office: Transamazonas. Rolf also wrote articles for the Bolivian Times and he occasionally advised Bolivian government in the matter of national tourism development.

Back in Holland he became a network manager and worked for some 6 years in the IT field. Finally he decided to share his enthusiasm for biology and switched to becoming a high school teacher in biology and physics.

Now teaching at the Jorismavo, still travelling regularly and hiking, maybe less far, but no less beautiful.
to know. More at my CV.

Report and publication in the Netherlands and in Colombia in 1988.
An additional thesis was produced titled: The effects of mist on the quantification of water added to the system.

Also an course was taken on Tropical High Altitude Ecology.